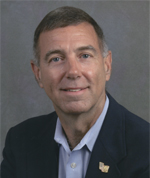 Colonel Danny R. McKnight, U.S. Army, Retired, was born in Columbus, Georgia…moved to Rockledge, Florida in 1959…graduated from Cocoa High School in 1969 and Brevard Community College in 1971.  He was a Distinguished Military Graduate from Florida State University in 1973, where he earned a BS Degree in Management.  In 1985, Danny earned his Masters Degree in Higher Education from the University of Florida while assigned as an Assistant Professor of Military Science in the ROTC Department.  Among his numerous military assignments were the following:

His military career also included combat duty on two occasions – Panama 1989 and Somalia 1993 (basis for the Book and Movie “Black Hawk Down”).  Colonel McKnight’s awards and decorations include the Legion of Merit (2 awards), the Bronze Star Medal for Valor, the Purple Heart, the Combat Infantryman’s Badge, the Ranger Tab, the Master Parachutist Badge with Combat Star, and the Pathfinder Badge.  After completing 28 and one-half years of service to our country, Colonel McKnight returned to his hometown in Florida.  He has served in two Homeland Security related positions in Brevard County…as the Homeland Security Coordinator for the County’s Emergency Management Office, then as the Homeland Security Training Coordinator in the Criminal Justice Center at Brevard Community College.  Colonel McKnight now focuses all his efforts on being a nationwide motivational speaker.  He and his wife, Linda, reside in Rockledge, Florida.

Colonel McKnight brings his experience to others through his presentation that provides a better understanding of the unparalleled commitment and leadership required to be successful when executing operations in the most difficult and severe situations.  Many key values associated with successful leadership will be highlighted and referenced throughout the presentation.  The real world experiences associated with his involvement in the event of October 1993 in Mogadishu, Somalia, will be expounded on to relate the commitment and leadership necessary to achieve mission success.

Colonel Danny R. McKnight was a distinguished military graduate from Florida State University in 1973.  He graduated with a B.S. in Management, then completed the Infantry Officer Basic Course, Airborne and Ranger Schools.

Colonel McKnight was assigned to the Mountain Ranger Camp in March 1974 where he served as a Company Executive Officer and Instructor.  Upon completion of the Infantry Officer Advance Course, he served in Korea as a Battalion Adjutant and was Aide-De-Camp to the Commanding General, 2d Infantry Division. Following this tour, COL McKnight returned to Fort Benning where he served as Aide-De-Camp for the same General Officer who was the Commanding General at Fort Benning.  While at Fort Benning, he was assigned to the 1st Battalion 58th Infantry (Mech) where he commanded Company C for 22 months.  Next, he was assigned as an Assistant Professor of Military Science at the University of Florida ROTC Department.  While at the university, COL McKnight earned his Masters Degree in Higher Education and Administration.  He then attended Air Command and Staff College at Maxwell Air Force Base, Alabama.  Following this, COL McKnight returned to Fort Benning where he served as the Adjutant, 75th Ranger Regiment; S3, 3d Battalion, 14th Infantry; S5, 75th Ranger Regiment; Executive Officer, 3d Battalion, 75th Ranger Regiment; and Executive Officer, 75th Ranger Regiment.  He departed Fort Benning for Schofield Barracks, Hawaii where he commanded 4-27th Infantry for 19 months.  Upon his return from Hawaii, he assumed command of 3d Ranger Battalion on 11 February 1993 where he commanded for 17 months.  He then attended the U.S. Army War College at Carlisle Barracks, PA.  After graduation from the War College, he was assigned as the Senior Adviser at the 29th Infantry Division, Fort Belvoir, VA.  He then assumed duties as the Deputy Chief of Staff, Training, First U.S. Army, Fort Gillem, GA for 2 ½ years.  His final assignment was as the Chief of Staff, First U.S. Army, serving for 19 months before retiring on January 1, 2002.

Colonel McKnight and his wife Linda reside in Rockledge, Florida. 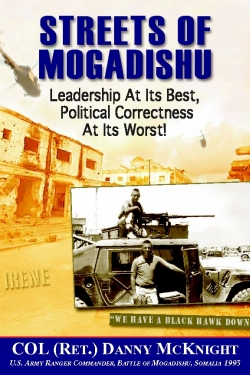 It is definitely not another “Black Hawk Down”...it in some way encompasses the thoughts associated with my related Speaking Subjects, as well as relates to my real world experiences, especially in the Army and in many instances specifically about Somalia (“Black Hawk Down”).  The Book is enlightening regarding many decisions made in 1993 that impacted the mission in Somalia.  Understand this, I am quite possibly the most “politically incorrect” person in America…the Book projects this thru my honesty, truthfulness, opinions, and beliefs.

ABOUT BLACK HAWK DOWN:

On October 3, 1993, Task Force Ranger was involved in "America's most savage raid since the Vietnam War." The book and the movie provide a riveting and realistic look at what soldiers can and will do for each other and their country.

Danny McKnight  is a retired American Colonel who served in the United States Army. He is best known for his role as commander of the 3rd Battalion, 75th Ranger Regiment in the Battle of Mogadishu. His participation in the battle was also heavily portrayed in the book and blockbuster film Black Hawk Down, where his role was played by Tom Sizemore.

Leadership: The most important attribute of our great country for 230-plus years…the greatness quality of successful leaders can best be described by seven key values—loyalty, duty, respect, selfless-service, honor, integrity, personal courage.  The interrelationship of these values is the essence of successful leadership.

Commitment: The commitment I believe in and talk about is a special one that comes only from the heart…it is not a cognitive thing, but more a thing of deep feeling and strong belief thing.

Homeland Security: What is this really, and where are we with it today?  It is not new…it takes place within the United States of America, as well as all over the world…its focus is the protection of all American citizens at home and abroad.

Terrorism: This threat is not a passing thing…it is here for us to deal with for many, many years to come.  Terrorism has existed for many years…no it did not just begin for us as Americans on September 11, 2001…it was even confronted in Mogadishu, Somalia in 1993 by Task Force RANGER.  Unfortunately, many Americans DO NOT GET IT, but they need to understand the reality of the global war on terrorism.

Training: Next to Leadership, I believe Training is the most important aspect of ensuring the safety and security of our great country.  We must be the best trained people (military and civilian alike) to ensure our freedoms are never lost.  All of us as American citizens are responsible for the protection of the United States of America.

Patriotism: “Devotion to one’s country”…loving one’s country and energetically guarding its welfare…and finally, as an American citizen, the willingness to make the supreme sacrifice of giving one’s life to sustain the special freedoms and privileges of our great country.