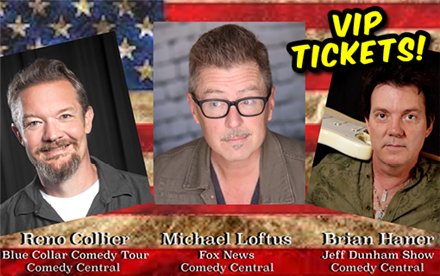 Finally, a Comedy Show for “The Right.” The Silent Majority. Conservatives. You know who you are!
Why should Liberals have Political Comedy all to themselves? From Late Night and Cable TV, the jokes are too one sided! That’s all about to change.
“The MAGA Country Comedy Tour” is Comedy Show that will bring balance back to entertainment. And it’s insanely funny!
Featuring 3 Nationally touring Headlining comedians!
- Reno Collier from “The Blue-Collar Comedy Tour” and “Comedy Central”
- Brian Haner, The “Guitar Guy” from “The Jeff Dunham Show” and “Showtime”
- Michael Loftus from “Fox News”, “History Channel” and his One Hour Special on “Comedy Central”
They say there’s no such thing as Conservative Comedy. The Loftus Party Live is here to prove them wrong. These guys love America, Liberty and The Pursuit of some serious Happiness. So forget the Politically Correct crowd and Let’s “Make America Funny Again.”
For Media Requests or Booking Info, contact Judy Landreth Wilkinson - JLWilkinsonConsulting@gmail.com / (706)518-2116.
Club Information:
Ticket Policy:


All acts and show times are subject to change.