Blake Percival – One Of America’s Most Important Whistleblowers 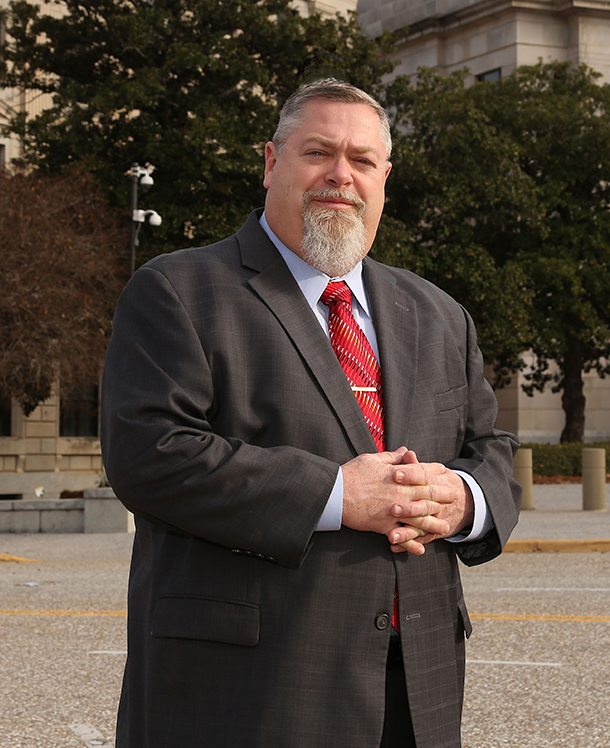 “Blake Percival is one of the most important whistleblowers in recent history,” Attorney Larry Golston says. “We as a country are safer because of what he did.” 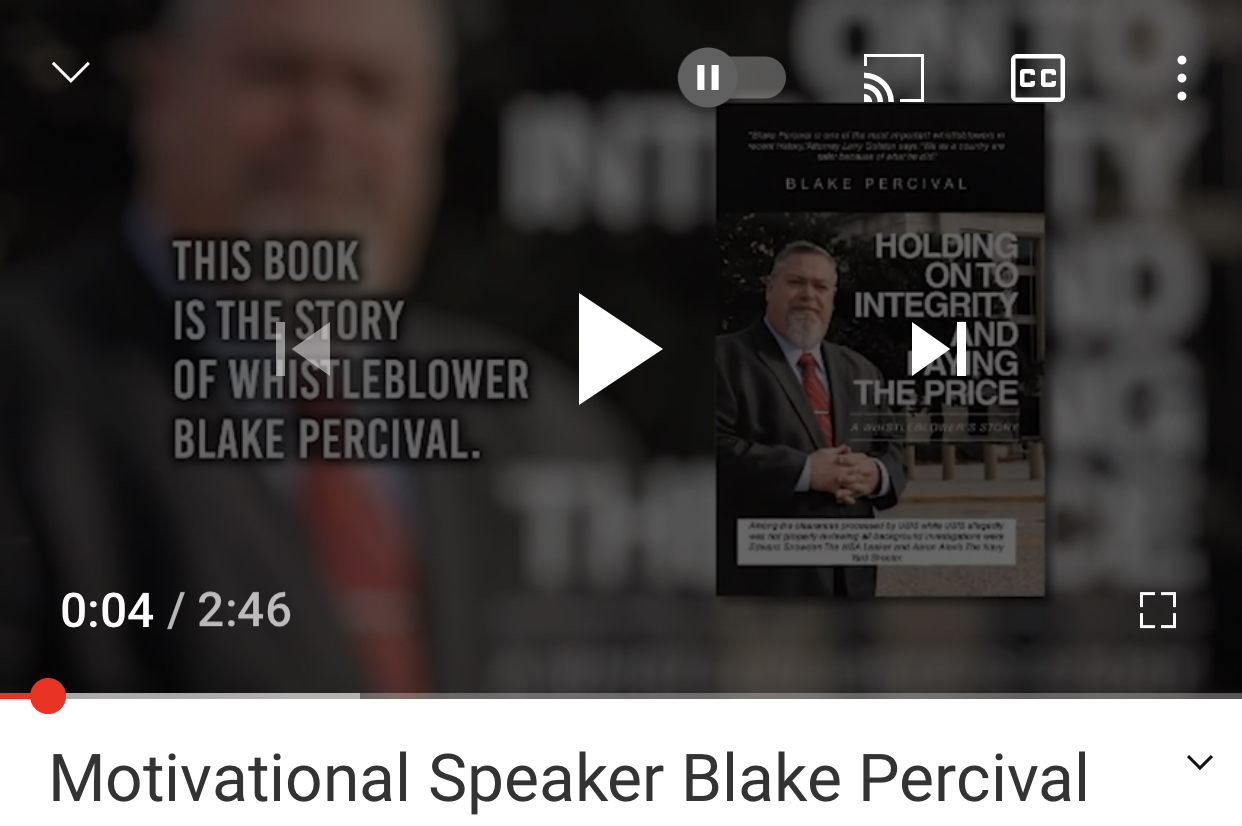 Blake Percival was born in Panama City, Florida where he was raised in a traditional Southern home.

He graduated from High School in Montgomery, Alabama in 1984 and served 6 years in the U.S. Army where he was Honorably discharged at the rank of Sergeant in 1992. He then worked as a Police officer in West Virginia and Alabama.

From 2001-2011, Blake worked for USIS, also known as US Investigations Services, where he rose through the ranks to the position of Director. USIS was a Company contracted by the government to conduct National Security Clearance Background Investigations on prospective and current Federal employees.

Blake became a Whistleblower in 7/2011 when he exposed that USIS was billing the U.S. Government for background investigations that allegedly had not been properly reviewed. Among the clearances allegedly not properly reviewed by USIS were NSA Leaker Edward Snowden and Aaron Alexis who shot and killed 12 people at the Washington Navy Yard.

For 4 1⁄2 years, Blake was not allowed to talk about the case, but once it settled in 12/2015 that changed, and he was featured on the front page of The Washington Post as the Whistleblower.

Blake is now sharing his experience in his new book, “Holding on to Integrity and Paying the Price – A Whistleblower’s Story”, being released on March 2, 2020.

Blake is the founder of The Whistleblower Assistance Fund and donates a portion of the books’ proceeds to help future Whistleblowers with financial needs during the legal process which can take years.

Blake now spends his time speaking regularly throughout the United States on leadership, integrity, business ethics, faith, motivation and is considered a leading authority on the vetting process and investigations.

Blake was honored by being named a Giraffe Hero in 2017, for sticking his neck out for the common good. 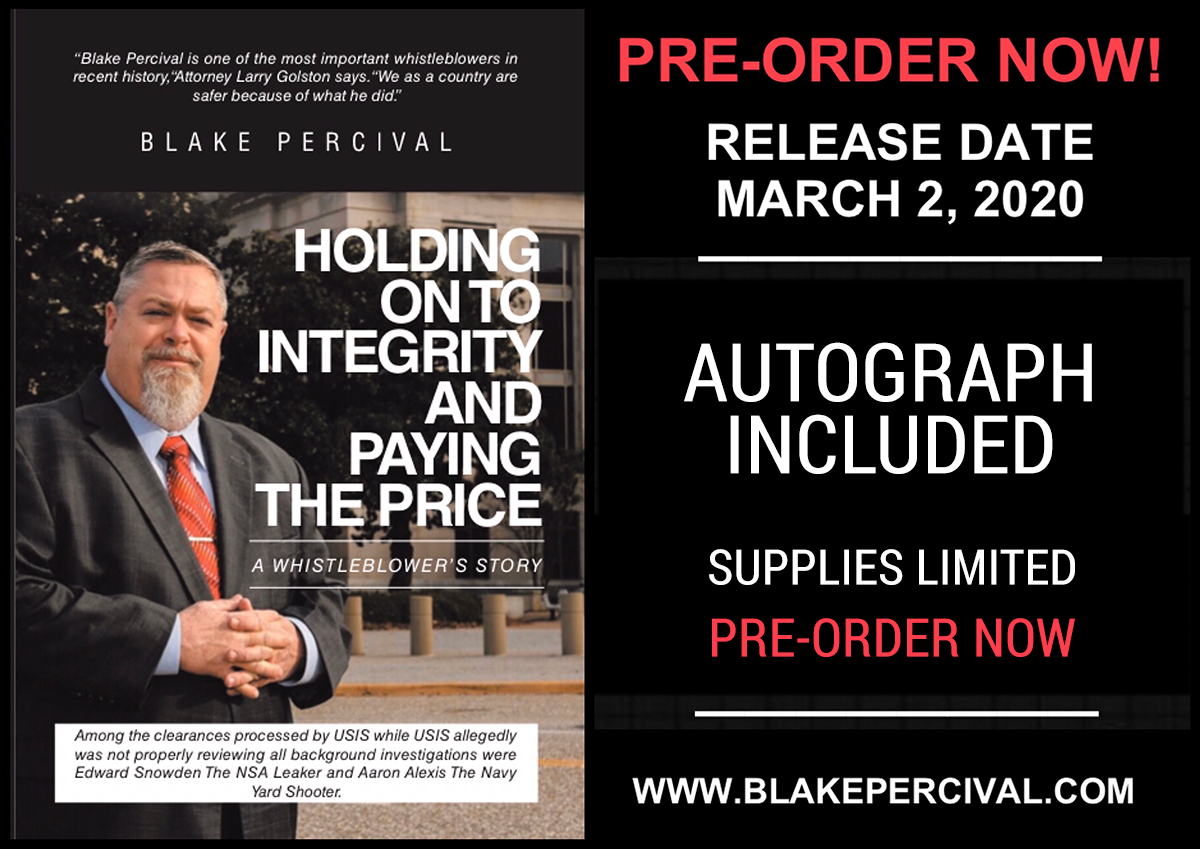 When Blake Percival graduated from college, money was so tight for his young family that he opted not to pay the $25 for the printed copy of his diploma. He persevered and worked his way through a number of law enforcement related jobs until he landed at US Investigations Services (USIS). USIS was a private company that was tasked with conducting background checks for people applying for security clearances with the Federal Government. Previously, this process was completed by the government but it was outsourced to USIS in 1996 as a way to reduce costs. There was an expectation that the need for security clearances would decline with the end of the Cold War. However, after 9/11, the need for security clearances soared. Background checks assigned to USIS included Edward Snowden and Washington Navy Yard shooter Aaron Alexis.

Blake did well at USIS and moved up the ranks. By the time he was promoted to the Director of Fieldwork Services in 2011, he was making $110,000 plus a bonus and stock options. He had come a long way from the decision not to purchase his college diploma. However, something troubling came with his new title. Blake discovered that USIS was charging the government for background checks that allegedly were not properly reviewed as a way to boost company revenue and, ostensibly, company bonuses. USIS employees described this activity to Blake as “dumping”. As one example, the government investigations later revealed that one group of 4 employees allegedly submitted approximately 13,000 background investigations in a period of one week!

Of course, Blake knew this was wrong and took action. “As of this moment, we do not dump,” he announced to the people under his purview. “If anyone tells you to dump, you send them to me.”

Blake’s group didn’t dump but they also did not meet their revenue goals the next month nor the following month. As a result, Blake felt pressured to comply with the dumping practice. He had finally reached a point in his life where he was financially comfortable and it would have been easy for him to follow the pack; but Blake could not and would not violate his ethics and he refused to dump cases. It did not take long before he was fired and asked to waive his right to file a False Claims Act case in exchange for severance pay.

However, Blake stuck to his principles, refused to sign the severance agreement and began the road to a False Claims case. Like many whistleblowers, there is a price to be paid for doing what’s right. Blake was blackballed by his chosen profession, his family was forced to move in with relatives and their bank account dwindled to $54 before Blake and the Department of Justice prevailed against USIS.

Want to purchase an autographed copy of his book? Click Here

For bulk orders, contact us directly at [email protected] .

Blake Percival, became a Whistle-blower in July of 2011 when he exposed that the United States Investigation Service, USIS, was billing the U.S. Government for background investigations that allegedly had not been properly reviewed. Among the clearances allegedly not properly reviewed by USIS were NSA Leaker Edward Snowden and Navy Yard Shooter Aaron Alexis ...

How an Alabamian risked everything to expose a gaping hole in national security; and won – Yellowhammer News

The whistleblower who exposed U.S.’s flawed security clearance system finally gets his reward – The Washington Post

Tales From A Real Whistleblower Compared To The Democrat's Fake One - Guest: Blake Percival - The McFiles Network With Host Christopher McDonald

One of the highlights of our conference was the National Security Threat block. Whistleblower Blake Percival kept us on the edge of our seat. I am shocked at his story and waiting to see if the government does anything to correct this.

Blake spoke at our church and had quite the testimony. I hope that when faced with a decision as crucial as Blake was that I will do exactly what he did. You can't put a price on the security of our country. Thank God for people like Blake and I highly recommend his a speaker for churches, schools, and businesses. We need more classes on Integrity!
- Ben, Texas
Wow what a story! This is the autobiography of Blake Percival, the USIS Whistleblower. From the minute I started reading this book I couldn't put it down. It's an uplifting story about doing the right thing regardless of personal cost. Blake really did make a difference in how the US government conducts Security Clearance Investigations. Who knows, if the government had reacted to his allegations quicker, they may have been able to prevent the security lapses evidenced by Edward Snowden, "the NSA leaker", and Aaron Alexis, "the Navy Yard Shooter". Ya gotta read this one.
- Roger, Alabama
5.0 out of 5 stars Must Read Now!

Reviewed in the United States on February 16, 2020

Format: Paperback Verified Purchase
What a Whistleblower story! Everyone should read this book. It is a real eye opener of the greed and deceit that goes on in our government. Blake had two choices when he found out about the deceit. He could have turned a blind eye or do the right thing. He chose to do the right thing and it cost him everything. A great book with a happy ending.
- Amazon Customer
Reviewed in the United States on February 10, 2020
Format: Hardcover Verified Purchase
Excited to add this MUST READ book to my collection . Blake Percival is one of the country’s most important whistleblowers and describes the hell that those who do the right thing go through. It’s all about integrity and doing the right thing even if it cost you your job, being black balled from your profession ... and caring more about country and our safety than about SELF! More politicians should follow his lead! Thanks for keeping Americans safe Blake and much success!
- Lynn, Georgia

I remember reading about this in the Washington Post. It’s a great story about someone who practices what he preaches. It’s also a story of perseverance when you know you’re right. It’s easy to read and leaves you feeling uplifted, motivated, and better about mankind. Whistleblowers sacrifice a lot to bring evil to light, and this one won.

A true whistleblower story. Fascinating read into the layers of hypocrisy and outright criminality in the government. Thank God for people like Blake Percival. This story must be heard. Share this book with a friend.

I just loved this book! It's the true story of how one man, Blake Percival stuck to his guns and did the right thing. Our government in the U.S. should celebrate people like Mr. Percival and lift them up as examples to our youth. This is an inspiring story that i thoroughly enjoyed.

What. A.LEGEND. Blake percival is a legendary, relevant and truly amazing and genuine human being who everyone needs to know about. This book is a must read and I could not put it down!! Can’t wait to see this book in the best sellers category. YOU WONT REGRET READING THIS!!

Excellent read about a man with morals, grit, and integrity. Happy to see a good guy come out on top, even when it was a huge struggle. There should be more Blake Percivals in the world. You want to read this mans story!

WOW! Getting the inside scoop on how our government is operating and how much this man had to sacrifice to get this out in the open is truly heart wrenching. An emotional, true life account of what happened to whistleblower Blake Percival. Wonderful read! Highly recommend you pick up this book.