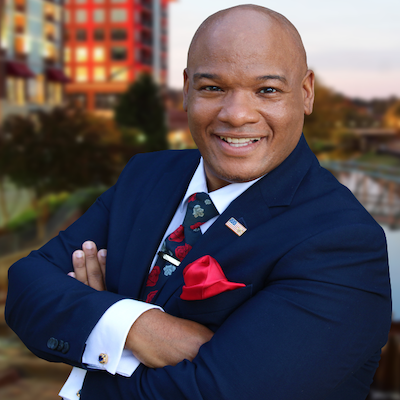 ABOUT | VIDEOS | THE BOOK

Pastor Mark Burns, labeled by Time Magazine as “Donald Trump’s Top Pastor” and one of the 16 People Who Shaped the 2016 Presidential Election by Yahoo News, is the Founder & CEO of the 2nd largest black owed & operated Christian TV network in America, The NOW Television Network, a Christian television network, that reaches 236 Million Homes and 83 countries in the US, Sub-Saharan Africa, & Western Europe on cable and satellite TV. theNOWnetwork.org. During President Trump’s Presidency, Pastor Burns was appointed to his Evangelical Faith Advisory Council, where he served from 2016-2020.

Pastor Burns is a renowned motivational speaker that has energized audiences across the country. He’s currently on the American Freedom Tour with President Donald Trump, sharing the stage with conservative giants such as of Candance Owens, Sean Hannity, Sarah Huckabee Sanders, Dan Bongino, Senator Ted Cruz and so many others, with stories that inspire greatness out of anyone listening just like his “All Lives Matter” Speech at the 2016 Republican National Convention which has inspired the world.

Pastor Burns is the Founder and Senior Pastor of multicultural, non- denominational contemporary church, The Harvest Praise & Worship Center of Easley, SC with a weekly televised broadcast entitled The Hour of Wisdom with Pastor Mark Burns. He is also a published author of his astonding new book, “The Trump Card: Fighting Racism with Trump’s Policies and not BLM Propaganda.” Published by Charisma House. 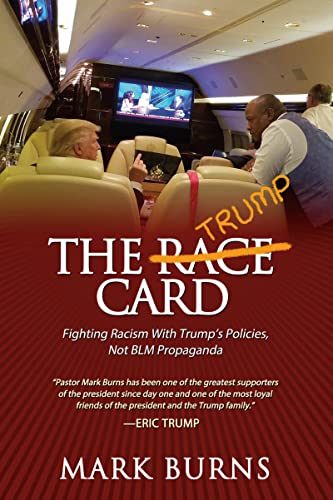 You can’t fight racism with racism.

After reading this book, you will understand what is happening behind-the-scenes as the media and critical race theorists try to tear our nation apart. You will be able to stand up for conservative policies that will promote racial healing and unity for America.

The mainstream media, critical race theorists, and the Black Lives Matter movement are working to divide Americans, not unite us. In this provocative book, Pastor Mark Burns, an outspoken conservative and longtime Trump surrogate, exposes:

•How the mainstream media is helping create racial division
•The money-hungry Marxists behind the Black Lives Matter movement
•The dangers of critical race theory
•Why Trump’s policies are good for all Americans, including Black Americans
•How he stopped playing the race card
•Why the church must speak out against a racially divisive narrative

Burns argues that the way to heal a racially divided nation and save America is not with the racist, status quo policies of Joe Biden and the Democrats, but with the conservative strategies that Trump has proven work—policies that promote Martin Luther King Jr.’s vision for an America where people are not judged by the color of their skin but by the content of their character. The colors that matter most are not black and white but red, white, and blue.

Pastor Mark Burns at the RNC: 'All Lives Matter'
The Evangelical minister tells Republican National Convention that Donald Trump will make sure all Americans have jobs.

"Tonight was by far the greatest night the Republican Party has had since Ronald Reagan was President. I don’t care what you think of Donald Trump – his speech tonight was electric. But more than anything the tone of the night marked a noticeable change in what the Republican party is all about. I remember in 2008 and 2012 the speakers were all consumed with meaningless social issues bullshit like gay marriage. Everyone who spoke was white, boring, and yawned us all to death about how their families went to church every Sunday.

Those days are clearly over.

Tonight the Republicans had a gay entrepreneur, a black pastor from South Carolina, and several women speak on behalf of the candidate. This never would’ve happened with losers like Mitt Romney, Jeb Bush, or John Kasich, none of whom were around all week. We heard speeches about equal pay for women, maternity leave, helping the disenfranchised gain a voice, ending corporate influence in politics, helping black people in urban areas find jobs, and protecting the LGBTQ community. All of these things got wild applause from the audience.

In other words, this was a bizarro world Republican convention.

But by far the greatest speaker tonight was the first one – pastor Mark Burns.

Now THIS is a pastor Turtleboy can get behind. If this guy were my pastor I’d never miss a Sunday service. Not only because I’d wanna hear him talk, but because he scares the shit out of me. I feel like he’s the kind of pastor who will come to your house and drag you out of bed to hear the word of God.

More importantly, this is what the Republican Party needs. The elephant in the room (no pun intended) is that there aren’t many black people in the room at Republican rallies. Although PBS made it a point to zoom in on all 10 of them during Mark Burns’ speech:

But America is a country where white people are slowly becoming a smaller percentage of the country, so this business plan simply doesn’t have long term sustainability.

That’s why the Mark Burns speech tonight was so important. And let me tell you something – Mark Burns has ZERO tolerance for Hillary Clinton (read more at Pastor Mark Burns Speech Was So Electric That Turtleboy Might Never Miss A Sunday Service Again – Turtleboy (turtleboysports.com).